Using Coltrane Changes over a II V I

What are Coltrane Changes?

Coltrane changes (sometimes also termed the Coltrane matrix or cycle) refer to a progression of substitute chords employed by the great jazz saxophonist John Coltrane. These substitute chords have now become a commonplace harmonic device with many modern jazz musicians.

Coltrane began experimenting with these chords in the 1950s and continued his work with the cycle on his legendary album ‘Giant Steps’ in 1960.

The substitute chords Trane used for his cycle are perhaps best explained by comparing a standard II V I progression with one modified to include his matrix. A great example of this is his re-harmonisation of the Miles Davis composition ‘Tune Up’, which he re-wrote as ‘Countdown’.

Illustrated below (in the first stave) is the first four bars of the composition ‘Tune Up’ which features a II V I progression in the key of D major. In the second stave you can see the application of the Coltrane cycle over the same sequence. 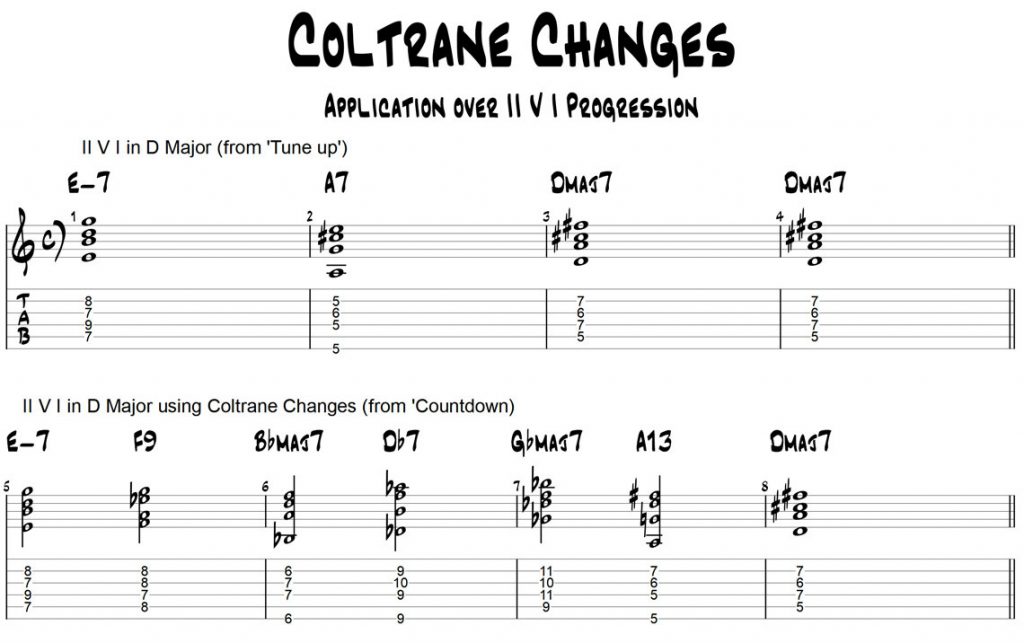 At first glance, the two staves seem to have little to do with each other, except perhaps that they begin and end on the same chords (Em7 and Dmaj7) There is however an ingenious harmonic process at work here.

Coltrane uses a multiple key approach in his cycle which moves keys by major thirds. The sequence begins with the IIm7 of D major (Em7) and ends with the Imaj7 chord in the same key (Dmaj7)  In between these two chords are two II V’s (the first in Bb major and the second in Gb major)

If we take these key centres in isolation, we get the following three major keys:

In simpler terms, this just means that the three keys Coltrane is using are separated by the interval of a major third.

To further emphasise the key changes, Coltrane added a V7 chord just before each new tonic chord, giving us: F7 – Bbmaj7 and Db7 – Gbmaj7. He also adds the V7 of the final key (A7) just before the last chord (Dmaj7)

'Tune Up' and 'Countdown'

Coltrane used his cycle on his own composition ‘Countdown’ which in itself is based on the chord changes to ‘Tune Up’ and it provides a way to enhance the original harmony without having to completely rearrange it.

In a future lesson I’ll explore some improvisational patterns that you can use to negotiate these tricky looking chord changes.

In the meantime try and memorise the changes above and play through the chords I’ve written above.

Coltrane changes will seem very challenging at first, however with some dedicated practice you will soon find that they are a a very valuable addition to your harmonic vocabulary.